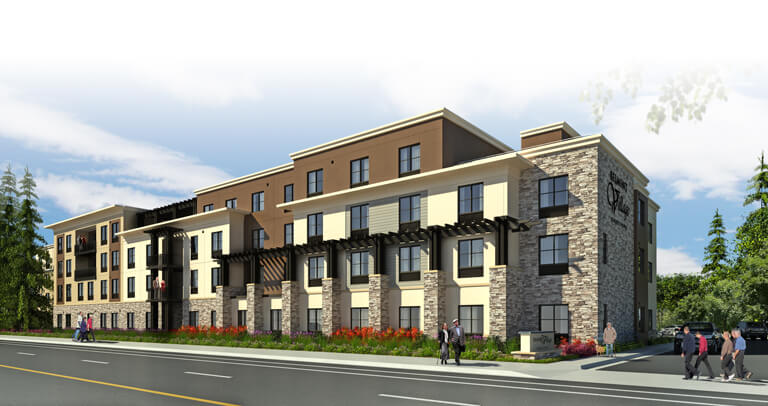 As Seen in Senior Housing News

The nearly 150-unit community, Belmont Village Senior Living Los Gatos in San Jose, California, opened with a ribbon-cutting ceremony on March 18. The community’s amenities include a tree-lined pocket park along with indoor and outdoor areas for dining and resident engagement.

The new community represents Belmont’s 14th community in the state of California and joins the Houston-based operator’s portfolio of 32 communities.

In particular, Belmont Belmont Village Founder and CEO Patricia Will said the community is helping to meet the desires of the incoming Silent Generation and baby boomer demographics, who seek higher levels of engagement and purpose than previous generations.

“[We’re seeing] many more couples, many more women with higher education than certainly I saw in the first 10 to 15 years of Belmont Village,” Will said. “It’s very, very exciting to think through how we have adapted to attract what’s beginning to be the customer of the future.”

The new community also fits into Belmont’s overall vision for intergenerational programming, which the operator undertakes across the country in various ways, such as through collaboration with school- or college-age kids. What makes this project unique is that it focuses on elementary and middle school students — an age group the operator has not had such close ties with in the past.

“What we love about this is the age group, and the fact that the school district itself is willing to help to put structure around that because they think it’s important,” Will said.

‘We shared a vision’

The Los Gatos community is unique in that it was conceived as part of a vision to collaborate with the Union School District (USD), which oversees six elementary schools and two middle schools. The project began coming together in 2016, after Belmont had responded to a request for proposal (RFP) bid to occupy a site next to the district’s headquarters.

Though other developers were vying for the land, USD chose to work with Belmont given that the senior living operator and school district are “incredibly compatible,” according to Will.

“We shared a vision for something that we often work on at Belmont Village, which is intergenerational programming,” Will told Senior Housing News.

In 2017, USD selected Belmont for a 99-year ground lease to locate a new community on school district property. As part of the arrangement, Belmont agreed to build a facility that could be used by teachers as a training center as well as by residents. The site will also offer additional parking for teachers.

“We’ll have teachers in the district come in both for their own meetings and to do forums so that we can reimagine how our seniors can interact with the school children,” Will said.

The collaboration also will offer residents the chance to mentor, teach and befriend students. With a location in the Silicon Valley suburb of Los Gatos, Will said the resident base will likely include pioneers in the tech industry, federal judges, physicians and entrepreneurs.

“Maybe it’s a resident who is a concert violinist who is actually giving instruction,” she said as an example of the community’s intergenerational teaching opportunities. “It’s coming with the full endorsement and support as an extension of learning from the superintendent of schools, and the board of the school district itself.”

Belmont will also use the community to experiment with new programs.

“I’ll bet you we put on some programs that may or may not work,” Will said. “Everybody is on board to try to do something very original and very special.”