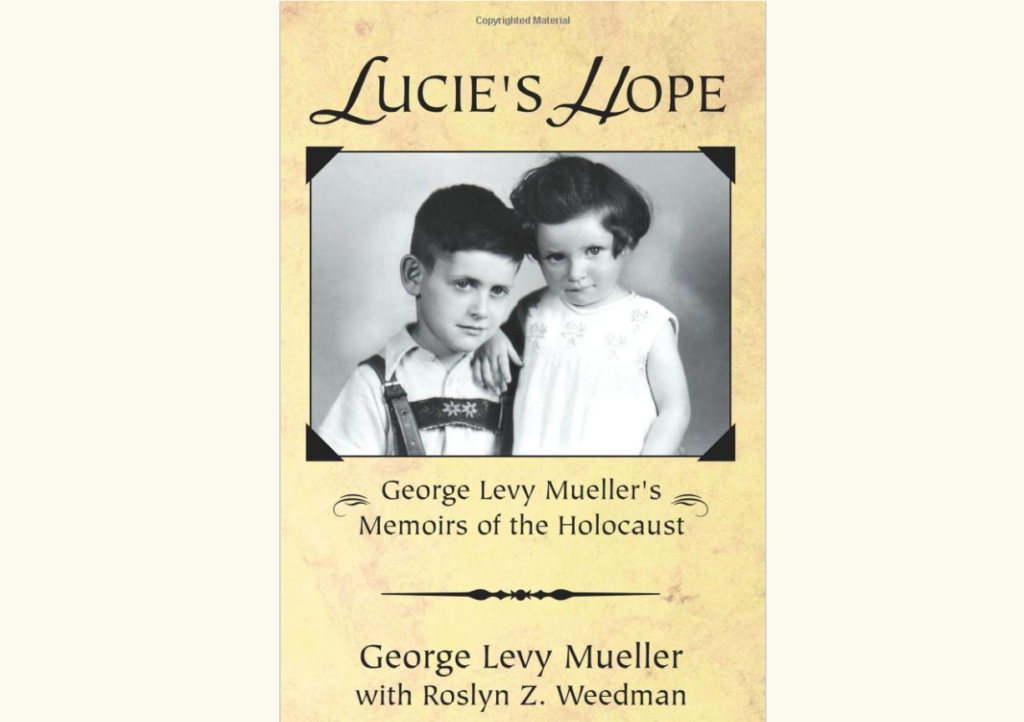 In honor of International Holocaust Remembrance Day, Belmont Village Senior Living Geneva Road is proud to share the incredibly profound stories, experiences, and wisdom of resident George Levy Mueller: a Holocaust survivor, army veteran, and author with 5 children, 15 grandchildren, and 9 great-grandchildren. Sharing his life experiences in intimate detail, he describes his childhood in Germany, which went from normal to horrific, detailing unfathomable anecdotes of pain, loss, persecution, and imprisonment at notorious Nazi concentration camps such as Bergen-Belsen, until his eventual liberation in 1945.

“George’s incredible optimism, love for family, and his remarkable zest for life is truly inspiring. He’s a ‘Renaissance Man’ and charismatic ‘Jack-of-all-Trades’ – speaking three languages – having the unique ability to always raise those around him and sense the comedy in life. His potent, uplifting presence has been felt by those around him at the community,” says Patricia Will, Founder and CEO of Belmont Village Senior Living. “It has been a remarkable opportunity and privilege to have him at our community and honor stories like his – particularly for those who have faced unimaginable atrocities and then lived incredibly vibrant lives.”

George was born in Lippstadt, Germany in 1930. Beginning life with a secure, stable, and healthy childhood, he gradually became aware that he and his family were being increasingly shunned, degraded, and segregated as Germany experienced a meteoric rise in anti-Semitism leading up to the Holocaust. George was kicked out of the boy scouts and the Nazi’s forced his father to sell the family’s prosperous clothing business at a great loss. The Nazi’s then evicted George’s family from their home and seized all their possessions. George’s father and uncle were arrested and taken to a concentration camp during Kristallnacht when Nazi sympathizers destroyed Jewish homes, businesses, and synagogues in addition to violently assaulting and murdering them, all while the police watched. Although his father and uncle were later released, they died from their wounds shortly after. George’s mother then sent he and his sister, Ursula, to live at a convent in Holland and hide in plain sight. However, within a year, the Nazi’s took the two children and transported them to several concentration camps. After enduring unspeakable horrors, George and his sister survived because the Soviets liberated them from being taken to their certain death.

For most of his life in America, George concealed his Jewish identity and past, concerned that anti-Semitism would endanger him in the United States. He changed his Jewish name of “Levy” to “Mueller,” and decided to hide his true identity. Fifty years later, a cathartic experience led George to finally reveal his past to his family and share his extraordinary story of survival. With the fervent support and encouragement of his family, he was eventually persuaded to write his memoir, Lucie’s Hope, sharing his experiences and educating the world to ensure that history does not repeat itself.

“Today, I am a proud husband, father, grandfather, and great-grandfather. I just want to live like everyone else,” says Levy Mueller. “At Belmont Village, my wife and I have flexibility and freedom to enjoy life in an inclusive community free of judgment, where everyone is accepted for who they are and that is liberating.”

“After many years of suppressing his true identity, we are grateful to George for sharing his story of survivorship. At Belmont Village, we find it extremely important to continue the recognition of our amazing residents, who have so much experience and wisdom to share with the world. We strive to create a place for our residents to not just celebrate their accomplishments, but also help them to continue thriving in their later years. We are honored to be a part of this new chapter in George and Katie’s lives,” adds Will.