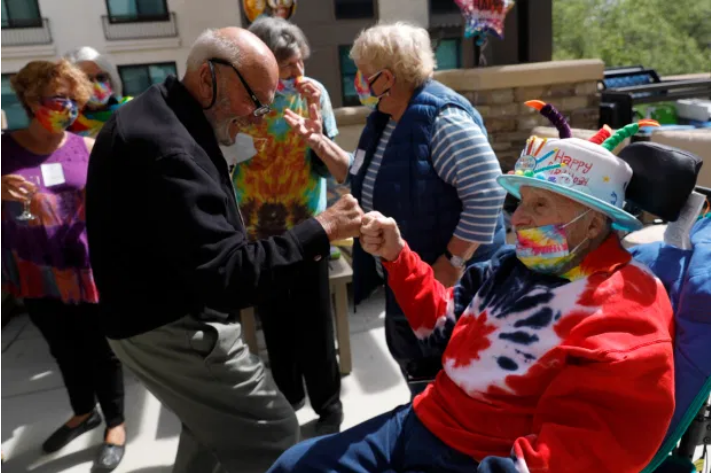 As Seen in Mercury News

What a difference a year makes.

On Dick Wezelman’s birthday last April 2, shortly after the coronavirus first arrived in the Bay Area, he could only wave to his wife Beany and their closest friends from an upper window of the Belmont Village Senior Living facility. Later, he was wheeled down to an outdoor courtyard, but separated by a giant metal fence, he still couldn’t physically touch anyone.

When Wezelman turned 88 on Friday, kisses and hugs abounded as the tie-dye wearing crowd of vaccinated seniors gathered on an outdoor garden terrace for lunch and cake.

The world-traveling couple, beloved in Berkeley for their Dick and Beany ethnic arts sales and passion for African culture, married in Dar Es Salaam, Tanzania in 1966. They share a common wanderlust and have experienced countless adventures together around the world. They hiked across the Sahara desert in 1973 and traveled not just throughout Africa, but also to Papua New Guinea, Pakistan, India, Vietnam, Thailand and other places too numerous to mention.

“88, it’s great!,” his wife Beany Wezelman, 81, said as she placed a festive white birthday hat on her husband’s head.

Belmont Village Senior Living has reached over 98% vaccinations for all staff and residents, and because of early-on strict protocols including testing, masking and social-distancing, there were no deaths at the facility. Executive Director Michelle Moros said that they few cases they had were quickly isolated, but there was no community spread like in many Bay Area elder-care facilities.

“If they’re vaccinated, they can hug,” Moros said. “It’s been a game changer and a relief, and has given our residents so much freedom.”

As the Wezelmans and their friends celebrated with lunch, beer and wine and a chocolate birthday cake, everyone felt they had come a long way since the previous year’s celebration. The relief was palpable, and could be felt in the air.

Longtime friends John and Claude Elk, have known the couple since the early 1970s and have traveled throughout the world with them.

“It’s so much nicer now. We still have to wear the masks and be very careful, but it feels like a big weight has been lifted,” Claude Elk said.

Click here to read the full article on MercuryNews.com.