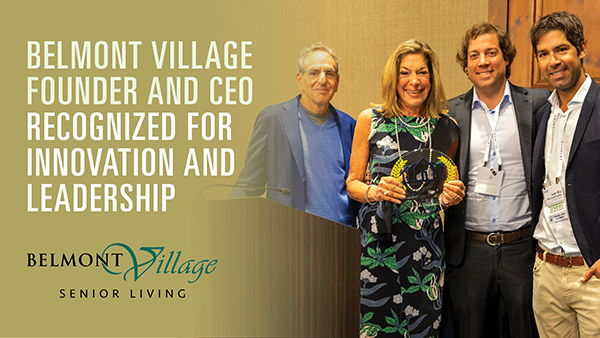 ASHA recognizes Patricia Will among industry pioneers for innovation and leadership

Belmont Village Senior Living Founder and CEO, Patricia Will, was recently inducted into the American Senior Housing Association’s (ASHA) Senior Living Hall of Fame, in recognition of her groundbreaking innovation and influence in the senior housing sector.

“It is a true honor to be recognized by AHSA and join a distinguished group of remarkable leaders in the senior living industry. What is incredibly special about Senior Living, is the privilege we hold in serving older adults, ensuring they know they are cared for and supported,” states Will. “It may not seem so now, but in this industry, we have seen an incredible shift in the perception of aging. Back when I was researching care options for my mother-in-law, Josephine, who had developed early-stage Alzheimer’s in the 90s, care options were limited—not only for aging individuals with cognitive disorders, but also the wider spectrum of frail, elderly seniors. It was here that the idea of Belmont Village, an improved care facility that promotes mental stimulation, socialization, and a healthy lifestyle, was born. I’m thrilled to be part of an incredible team at Belmont Village who’ve been able to change the paradigm of senior living and ensure older adults not only maintain dignity but thrive as they age.”

The ASHA Senior Living Hall of Fame aims to recognize visionaries who have distinguished themselves through uncommon foresight and unwavering commitment to senior community living, encouraging independence, dignity, and quality service for residents. Will is to be honored alongside three other industry pioneers, the late Carl Campbell, and brothers Robert ‘Bob” Thomas and William “Bill” Thomas.

With a background in real estate, an MBA from Harvard Business School and the drive to rethink assisted living, Will established Belmont Village in Houston, TX in 1997, which has since expanded to 31 operating locations in the United States and Mexico with several more in development. Through the combination of leading gerontology practices, outstanding hospitality and state-of-the-art design, Will developed Belmont Village’s high-end facilitiescommunities, hired and trained care professionals and established award-winning programming that allows aging individuals to thrive in assisted living.

In addition to operating a successful business with award-winning programming, Will is chairman emeritus of ASHA, serves on the board and Public Policy Committee of the California Assisted Living Association, the board of the Texas Assisted Living Association, the Executive Advisory Board for Argentum, the board of the University of Southern California–Davis School of Gerontology and the University of California, Los Angeles, Center for Longevity.

Will was named a Globe Street Senior Housing Influencer in 2020, was inducted into the Texas Business Hall of Fame in 2018, and was awarded the McKnight’s Women of Distinction Hall of Honor in 2021.

“While many say they hope to create the kind of place that they would choose for their families, my mother’s incredible persistence and passion has ensured that she really did so, creating a home for my grandparents, first Josephine, and later my grandfather,” states Adam Will, Director of Communications at Belmont Village who will induct his mother, Patricia, into the Hall of Fame during the ceremony. “What has been so incredible, is her careful attention to the great need for care among the aging loved ones for others. She, herself, modeled the culture of innovation integral to Belmont Village with a culture of continuous investment in research and collaboration with an interdisciplinary team of experts and an incredible roster of research and academic partnerships. Her work has helped propel the industry toward person-centered care by acknowledging their needs, providing hospitality rooted in health and wellness, and allowing them to live their lives with purpose. It has been an honor to watch my mother’s work enrich the lives of so many seniors and their loved ones.”