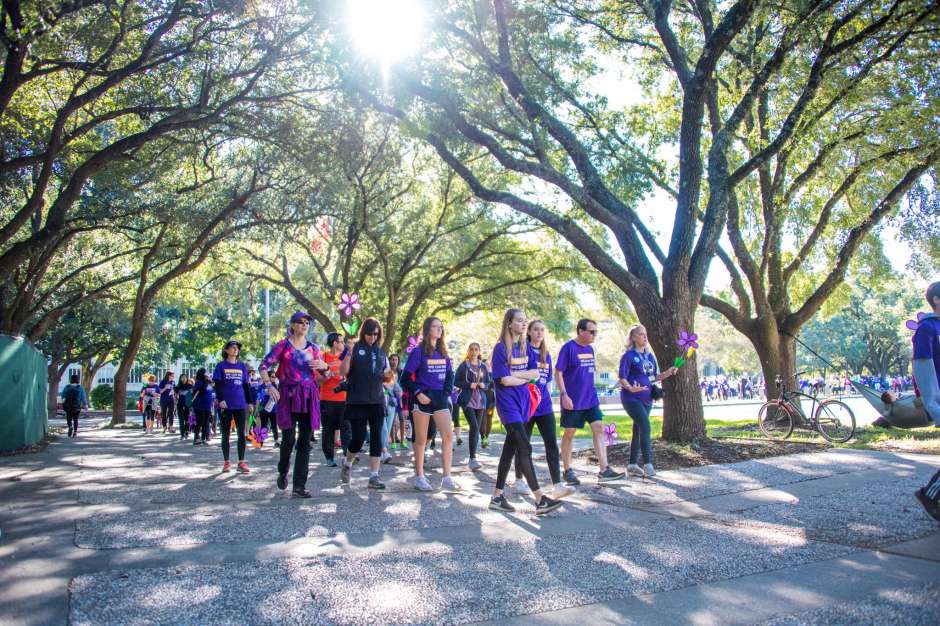 HOUSTON CHRONICLE – The 2019 Alzheimer’s Association Houston Walk to End Alzheimer’s is just around the corner, with a goal of raising awareness and $1 million to fight the difficult disease.

The Saturday, Nov. 2, event is expected to get more than 5,000 walkers to lace up their sneakers and start moving on a fall morning at the University of Houston’s Lynn Eusan Park. Belmont Village Senior Living Co-Founders Patricia Will and Walt Mischer, Jr. have been named co-chairs of the Houston fundraiser and hope to make this year’s walk the most successful yet to support care, support and research through the Alzheimer’s Association.

“Given the incredible resources of Houston, the fourth largest city and third largest county in America, $1 million is for sure within our reach,” said Will. “As co-chairs, Walt and I are committed to breaking that barrier for the first time this year. Truth is, we think we can go way beyond that.”

Will first saw the effects of memory loss years ago in her mother-in-law. Although they never knew if it was actually Alzheimer’s, Will began to understand the gravity of such a diagnosis.

“But I knew that we were onto the challenge of our lifetimes — disease that stopped memory in the long-term past, and sadly, lost the connections that keep vibrant people in the present,” Will said.

She knew then that she wanted to do something to help, so she and Mischer, Jr. started Belmont Village in 1998. Now with two Houston locations in West University and Hunters Creek Village and others across the nation, Belmont Village keeps supporting Alzheimer’s issues. Last year, the company raised more than $76,000 for the Houston walk. This year, Belmont Village has a goal to raise $50,000, which the company plans to match with another $50,000. The impact of Alzheimer’s among their residents motivates the co-founders to keep pushing and working for change.

“Our average customer is 86 years old, and age is the highest risk for Alzheimer’s. So, if you are lucky enough to have conquered cancer and cardiovascular disease, the likelihood that you will suffer from Alzheimer’s in old age is very high,” Will said.

She added that roughly one third of Belmont Village residents in Houston exhibit some form of dementia and urged people to step up and help out for a critical problem that affects and will continue to affect so many if more headway is not made in research.

“Alzheimer’s disease is already the greatest tragedy of our parent’s generation; it will become our generation, the Baby Boomer’s greatest tragedy if unchecked,” Will said. “Today, it is the sixth largest killer in America, and the only major disease with no cure on the horizon.”

Houstonians have multiple ways to get involved, and it all starts at www.alz.org/walk. The easiest way is to donate. If you’re up for enjoying some fall weather and exercise, register to walk as a team captain, team member or individual. Then, you start raising money and start talking about Alzheimer’s with your friends, family and other contacts to get them engaged as well.

Registration for the walk starts at 8 a.m. on Saturday, Nov. 2, at the University of Houston’s Lynn Eusan Park, located at 4800 Calhoun Road. A ceremony at 9 a.m. will precede the walk that starts at 9:30 a.m.

Will and Mischer, Jr. are asking those they know to take part. Will urges Houston organizations, businesses and individuals to do the same.

“I cannot think of a single Houstonian who has not been touched by this tragic disease in some way. If you are out there, and capable of helping, we ask that you please honor your loved one by forming a team and by helping us to position our city as the leader in fighting the Alzheimer’s epidemic.”