How Belmont Village Honored Our Veterans on Veteran’s Day 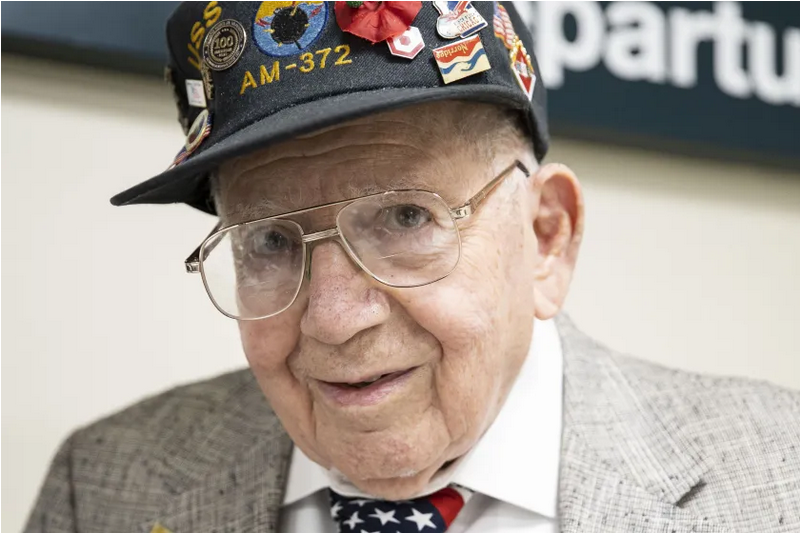 Chicago Sun Times: Unlocking a painful wartime past through photographs

The Navy minesweeper motto is “Wherever the fleet goes, we’ve been.”

The unofficial one, the one that Myron Petrakis remembers, goes something like this: “Put up the gold star, mothers, your son is in the minesweepers.”

In other words, don’t expect your boy to come home.

Petrakis came home. He’s 100 years old. He lives at Belmont Village Senior Living in west suburban Carol Stream. It’s been 77 years since he lost his buddy, John Pate, to a mine in the North Pacific. He still can barely talk about it.

Click here to read the rest of Myron’s, who is a Belmont Village Geneva Road resident, story.

To commemorate Veterans Day, Belmont Village Senior Living Turtle Creek proudly celebrated 29 resident veterans who were bestowed with the Air & Space Forces Association (AFA) Medal of Freedom on Friday, November 11th. The ceremony was part of a breakfast held at Belmont Village Senior Living Turtle Creek ahead of the Greater Dallas Veterans Day parade hosted by the AFA Seidel Chapter Dallas. After the breakfast, Belmont Village unveiled its recently updated American Heroes: Portraits of Service, a captivating veteran portrait gallery that memorializes the courage, bravery, and commitment of the veterans who reside at Belmont Village, honoring their exceptional service to this country.

It was standing room only Friday at Belmont Village Senior Living in Buffalo Grove for the unveiling of the newest additions to the facility’s “American Heroes: Portraits of Service” exhibition showcasing veterans.

Among them was Leonard Casper, a former drummer sporting a burgundy beret. He served in Germany during World War II and played with the U.S. Army’s jazz band.

“I can’t believe that’s me,” the 93-year-old said of his photograph, one of six unveiled Friday. “It’s a wonderful feeling that after all these years, someone will recognize me.”

Casper’s portrait now hangs alongside those of Phil Horwitz, Carl Grillo, Mike Molloy, George Economos and the late Warren Anderson. The portraits were taken several months ago by photographer Thomas Sanders, who has been photographing Belmont Village veterans at facilities nationwide since the “American Heroes” exhibition was commissioned in 2008.