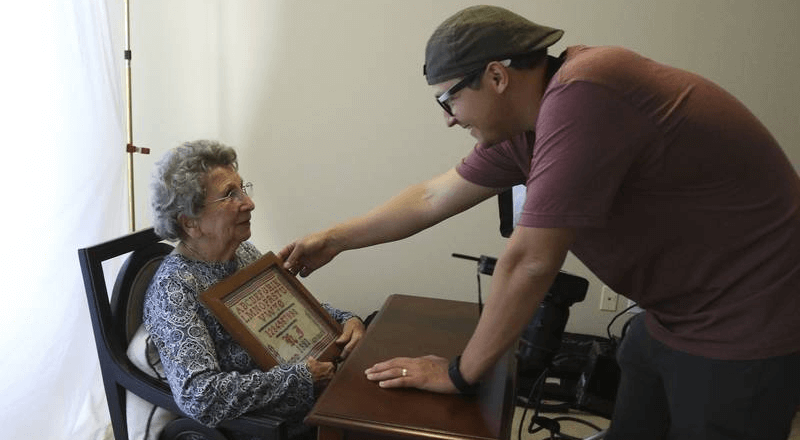 The centenarians had their portraits taken, each with some of their dearest possessions. The occasion? Belmont Village Senior Living is putting together a calendar featuring pictures of its oldest residents across the country. Five live in a Belmont community in Carol Stream.

They posed, not with academic degrees or some other accolade, but with simple keepsakes. During the photo shoot, they also freely gave advice from well-lived lives.

At 110 years old, Merle Phillips is the oldest in the group. For her turn in front of the camera, she wore a butterfly pin and necklace in honor of her husband, a butterfly collector. He died 49 years ago from leukemia. Phillips never remarried and never forgot the day they met.

She speaks, slowly now, of the party at the University of Iowa where she was a graduate student and saw Leonard Phillips, the man who looked so “distinguished” that she thought he was a professor. Even without the love of her life, Phillips would remain independently in her Wheaton house with the help of friends until she moved into her Belmont home at 107.

Phillips has become a beloved figure at Belmont because of her age but also because “she’s just an amazing soul,” Executive Director Jeanne Hansen said.

For her 110th birthday last month, Phillips didn’t want presents but asked for donations to the Spectrios Institute. A GoFundMe page has so far raised about $500 for the Wheaton facility that treats patients with vision problems. Phillips herself had surgery earlier this year to fix a congenital cataract she had since birth.

“I personally think how she got to be 110 is how she gives to everyone else,” Hansen said.

Phillips — born in Arkansas on April 2, 1907 — will say the secret to longevity is “just keeping busy.” The voracious reader rides a stationary bike every day for 45 minutes, goes to Bible study twice a week and attends Mass every Sunday at One Church Wheaton. At 72, she wrote the first of 11 books about her life and faith. She’s learning to use email on an iPad, one of the birthday gifts she did receive. She also marked the milestone by climbing into the bucket of a ladder truck with Carol Stream firefighters to get an aerial view of Belmont.

“There’s nothing she won’t try. I have no excuse,” Hansen said. “I have to try anything. If she can do it, why can’t I?”

One of the newest centenarians in the group, Karin Jaeger, turned 100 May 7. Sanders shot her portrait with an artifact her son found online from the ship that carried her from her native Norway to the United States.

Click here to view the full story by The Daily Herald.