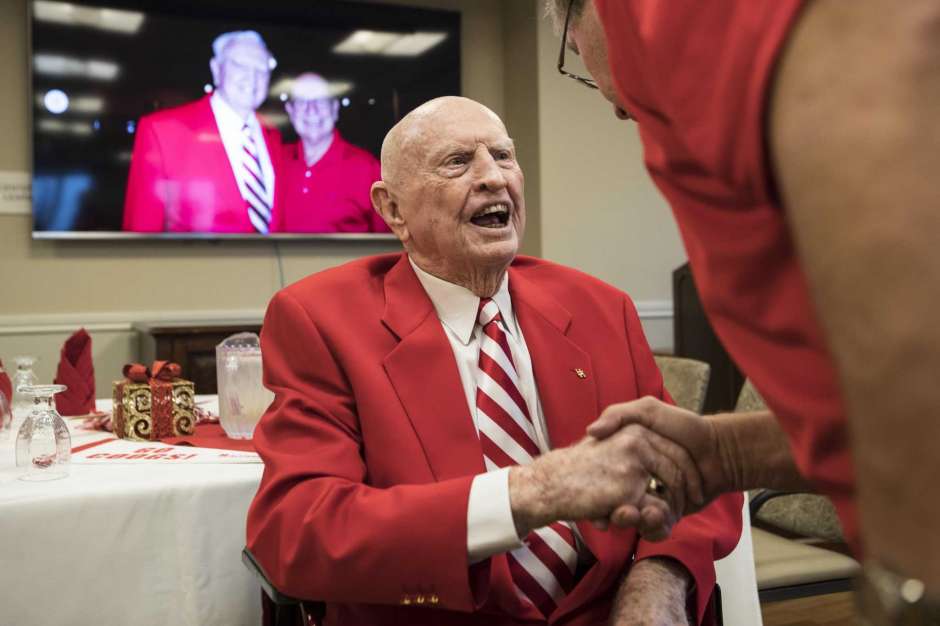 READ THE COMPLETE STORY IN THE HOUSTON CHRONICLE.

They gathered to share stories and offer plenty of thank-yous.

Bill Yeoman, father of the veer offense and the winningest football coach in University of Houston history, sat in a wheelchair at the head table. A rainy and cold Tuesday could not dampen the festive spirit, a mix of Christmas and early birthday celebrations for Yeoman, who turns 92 on Dec. 26.

Looking dapper in a red blazer, red-and-white striped tie and gold UH lapel pin, Yeoman greeted and took photos with each guest as they arrived at a private room at Belmont Village Senior Living.

A stroke five weeks ago has robbed Yeoman of his ability to speak. On this day, though, no words were needed, even as Yeoman tirelessly — and sometimes frustratingly — tried to convey his thoughts to a roomful of former UH players and supporters.

The wide smile of the man who coached the Cougars from 1962 to 1986 spoke volumes.

“He’s a legend,” said Mike Barbour, a linebacker for the Cougars in the early-to-mid 1960s.

Bo Burris, the quarterback when Yeoman introduced the veer in 1965, recalled how the coach played a major role in the racial integration of college athletics that same season, when running back Warren McVea, the most sought-after recruit in the nation, became the first black player to suit up for a major college football team from Texas. About the same time, UH basketball coach Guy V. Lewis signed Elvin Hayes and Don Chaney.

Steve Cloud, an offensive lineman from 1969-71, told a story about how Yeoman sometimes “just had a look he could give you worth a thousand words.”

In 1967, the unranked Cougars made a trip to East Lansing, Mich., to play third-ranked Michigan State. Yeoman was previously an assistant there and remained close friends with Spartans coach Duffy Daugherty. On the bus ride, trainer Bob Smith told Tuesday’s gathering, a convertible full of MSU fans “shot the finger” as they passed by.

At the stadium, Smith said, the Cougars were greeted by a large crowd hours before kickoff.

“People were standing on our bench,” Smith said. “I go back in and tell (longtime athletics trainer) Tom Wilson, ‘Who in the Sam Hill booked this game?’ He said Coach was good friends with the head coach, and I suspect he did it. I’m not giving him much credit for being real intelligent at this time.”

“Coach,” Smith said as he turned to Yeoman on Tuesday, “I didn’t give you much credit at the start, but at the end I was praising you pretty good.”