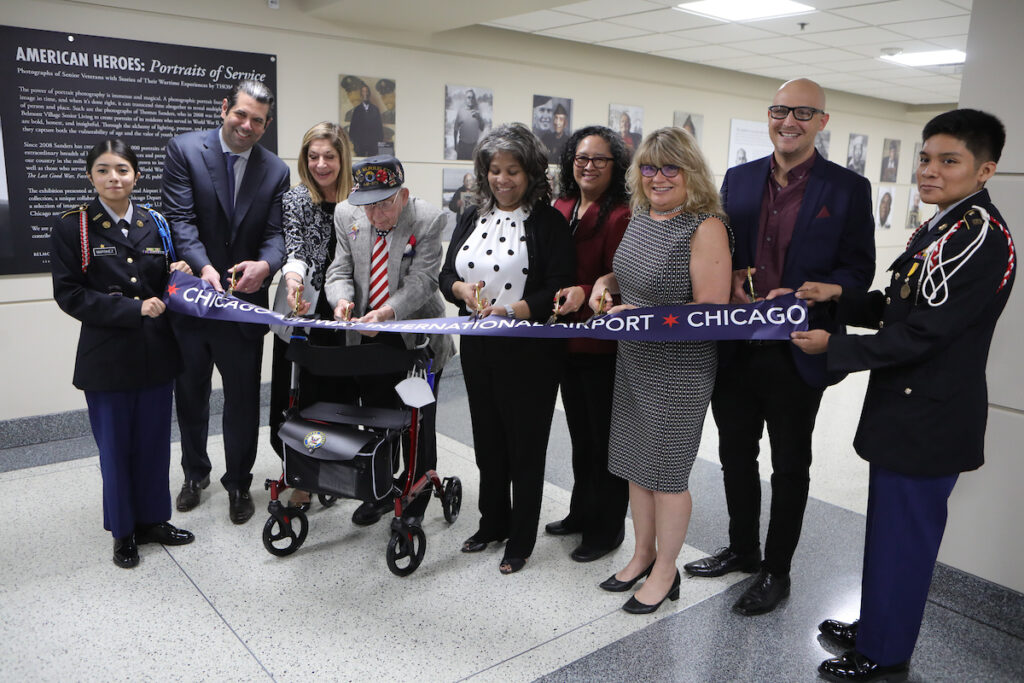 The Chicago Department of Aviation (CDA) unveiled a new gallery exhibit today titled “American Heroes: Portraits of Service” at Midway International Airport, located in the pedestrian walkway between the CTA Orange Line station and the terminal.

Organized by the CDA in partnership with Belmont Village Senior Living and co-sponsored by Harrison Street, the specially-curated exhibit features portraits of 65 senior veterans from across the country who served America during World War II, the Korean War and the Vietnam War, captured by nationally recognized photographer Thomas Sanders.

“On behalf of Mayor Lori E. Lightfoot and the Chicago airport community, I am proud to partner with Belmont Village Senior Living ahead of Veterans Day to unveil this exhibit that honors the brave men and women who have sacrificed so much to serve our country,” CDA Commissioner Jamie Rhee said. “We’re always looking for more ways to highlight the contributions of service members at Chicago’s airports through exhibits, regular Honor Flight Chicago trips to visit the national war memorials in Washington, D.C., and increased contracting opportunities for veteran-owned firms alongside other minority- and women-owned businesses.”

Through the exhibit, Midway travelers can read about each veteran’s service experience through storyboards and plaques that hang alongside the portraits. The captivating and powerful stories include experiences from Chicago-area veterans such as Myron Petrakis, who served as a Navy machinist during World War II on the USS Murrelet.

“I am dedicated to the memory of my boyhood friends and shipmates who made the ultimate sacrifice for our country in WWII,” a quote from Petrakis in the exhibit reads. “I lost six friends and 31 shipmates that I trained with when our sister ship the USS Minivet hit a mine on December 28, 1946, during sweeping operations in the Korean Straits. The war did not end for the minesweepers on VJ day.”

Another Chicago veteran featured in the exhibit, George Mueller, was liberated from a camp in Germany during World War II and then served in the U.S. Army during Korea.

“During WWII as a teenager, I was in a concentration camp in Germany,” Mueller said in his featured quote. “I was liberated by the Russian army who then sent me to the Americans. Ten years later, I was proud and thankful to serve in the American Army.”

Belmont Village Senior Living first launched the American Heroes: Portraits of Services photography project in 2008 when Sanders was commissioned to capture and preserve the compelling personal stories of veterans. The portraits led to Sanders’ first published book “The Last Good War: The Faces and Voices of World War II.”

“The American Heroes: Portraits of Service” has been a long-standing photography project at Belmont Village to capture the stories and images of veterans in our communities in an effort to preserve their history,” says Patricia Will, Founder & CEO of Belmont Village Senior Living. “The project is a staple in Belmont Village’s culture with portraits displayed in permanent galleries in our communities throughout the nation. The exhibit at Midway Airport is the first time our portraits will be displayed in a public venue, and we are delighted to share our residents’ stories of bravery and commitment with the general public.”

“Harrison Street is proud to sponsor this incredible tribute honoring senior veterans at Midway Airport,” says Christopher Merrill, Co-founder, Chairman & CEO of Harrison Street. “Since 2005, we have invested over $13 billion in senior living communities, including independent living, assisted living and memory care units across North America that have housed more than 60,000 seniors. We support veterans and active military, having recently partnered with the U.S. Government and Department of Defense to provide over 4,000 homes to military families located across six U.S. Air Force bases. We are pleased to join our long-standing partner, Belmont Village, and the Chicago Department of Aviation to pay tribute to the selfless service of these veterans.”

About the Chicago Department of Aviation (CDA)

The Chicago Department of Aviation (CDA) is self-supporting, using no local or state tax dollars for operations or capital improvements at O’Hare and Midway International Airports. Chicago’s airports offer service to over 250 nonstop destinations worldwide, including 47 foreign countries, combined. Together, Chicago’s airports serve more than 105 million passengers each year and generate approximately $70 billion in annual economic activity for the region. Please visit flychicago.com to learn more about the Chicago Department of Aviation.

Harrison Street is one of the leading investment management firms exclusively focused on alternative real assets. Since inception in 2005, the firm has created a series of differentiated investment solutions focused on demographic-driven, needs-based assets. The firm has invested across senior housing, student housing, healthcare delivery, life sciences and storage real estate as well as social and utility infrastructure. Headquartered in Chicago with offices in London, Toronto, San Francisco and Washington DC, the firm has more than 240-employees and over $50 billion in assets under management. Clients of the firm include a global institutional investor base domiciled in North America, Europe, Middle East, Asia and Latin America. Harrison Street was awarded Best Places to Work by Pensions & Investments for seven consecutive years (2014-2020) and was recognized by PERE as the 2021 Alternatives Investor of the Year, North America and 2020 Global Alternatives Investor of the Year. For more information, please visit www.harrisonst.com.