Resident at Belmont Village leads meditation sessions for coping with ailments: ‘It helps people ground themselves’ 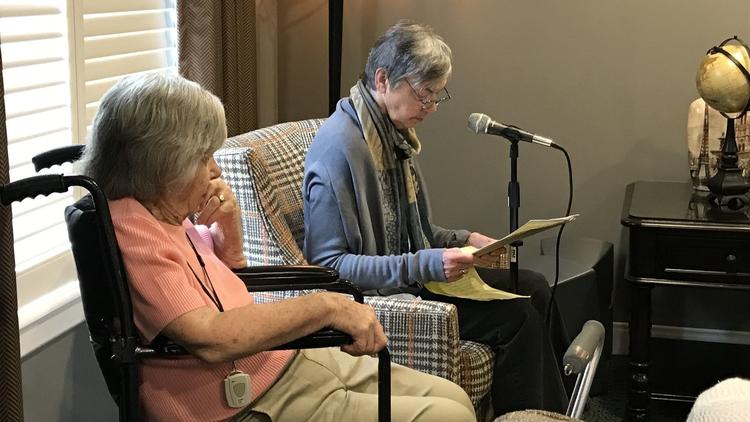 At the sound of the chimes, the meditation started and the people in the room closed their eyes or lowered their heads and began to focus.

The 11 residents of Belmont Village Glenview followed directions as fellow resident, Sheila Dixon, led them in a guided meditation.

She asked the residents to mentally scan their bodies to identify where they are holding tension. She instructed them to focus on their breathing and become more aware of their thoughts and surroundings with each breath.

Since November 2018, Dixon has been holding guided meditation sessions for residents of the facility for seniors, to help them with various aliments, she said.

But every Monday in April, in honor of Parkinson’s Awareness Month, Dixon held sessions to raise awareness about the purported benefits meditation has on slowing down the progression of Parkinson’s disease, she said.

Dixon, who has Parkinson’s disease, said meditation has helped her deal with the agitation or the speech impairment she experiences as a result of the disease because it helps her refocus and calm her mind.

“It helps people ground themselves,” Dixon said. “My meditation and the way that I can quiet myself down really helps.”

Dixon said she first started meditating in the late ‘70s, but she started focusing on it more in the last 20 years.

Jon Kabat-Zinn, a professor of medicine and the creator of the stress reduction clinic and the Center for Mindfulness in Medicine, Health Care and Society at the University of Massachusetts Medical School, was one of Dixon’s inspirations to start meditation, she said.

She explained that Zinn developed an eight-week course to teach people meditation.

“He outlined a whole course about being mindful and meditating and learning then to teach meditation to others,” Dixon said.

Over the years, Dixon said she has listened to CD’s, gone on retreats and met with a group of women who also meditate.

For the last five years, Dixon said she has meditated every day.

“(Meditation) changed me in being able to pause more, instead of react, to have a pause in there,” Dixon said.

Read the complete article on ChicagoTribune.com.