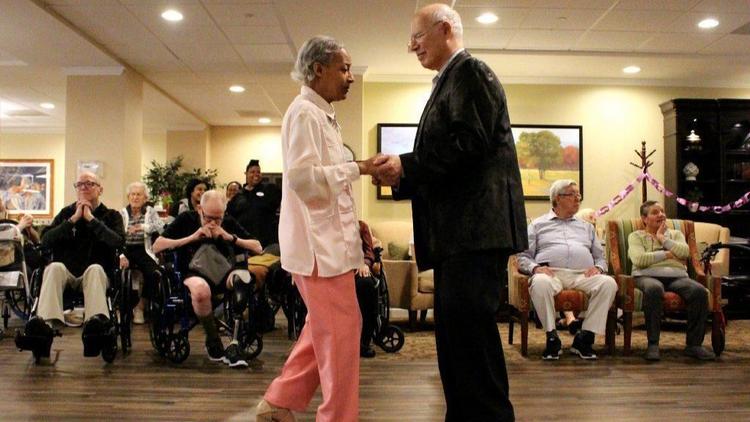 In the early afternoon of June 21, the lobby of Belmont Village of Oak Park featured a few rows of chairs that formed a circle, leaving the middle of the entryway empty.

One by one, residents from the senior living community and staff members gathered all around.

Music boomed from a stereo, and the Tender Loving Dancers marched in front of the audience and began their nearly two-hour set of world dances. From the American waltz to the Argentine tango, instructor Roberto Munoz and student Tom Doukas shared the histories of the popular dance styles.

Their performance was paired with Belmont Village’s event, The Longest Day, to benefit those affected by Alzheimer’s disease. Sponsored by the Alzheimer’s Association, the idea behind hosting The Longest Day on the summer solstice is to remember that the disease is “never-ending,” said activity programs coordinator, Samantha Knoblauch.

“Especially for our assisted living residents and caregivers, for people who have a loved one with dementia, when you try to do the all-day concept, it’s sort of a reminder that it’s ongoing,” she explained. “Unfortunately, we don’t have a cure for [it] yet. We don’t really have a way to predict it, and we don’t have a way to treat it.”

As of Monday, the Belmont Village of Oak Park had collected a little more than $1,000 in donations. Executive Director Caily O’Donovan shared that fundraising efforts will continue until the second week of July. She and her team plan on hosting more events, including a fashion show in September and the Walk to End Alzheimer’s in October.

Participants are encouraged to build teams, select an activity to do for an entire day, and raise money for the Alzheimer’s Association, as well as awareness for the mental illness. For two years, the Belmont Village of Oak Park has joined in supporting the cause, rounding out this year with a dance-a-thon.

“Dancing is so good with the mind because of the repetitious movement,” Munoz said, adding it’s also a fun way to exercise.

Click here to read the complete article in the Chicago Tribune.