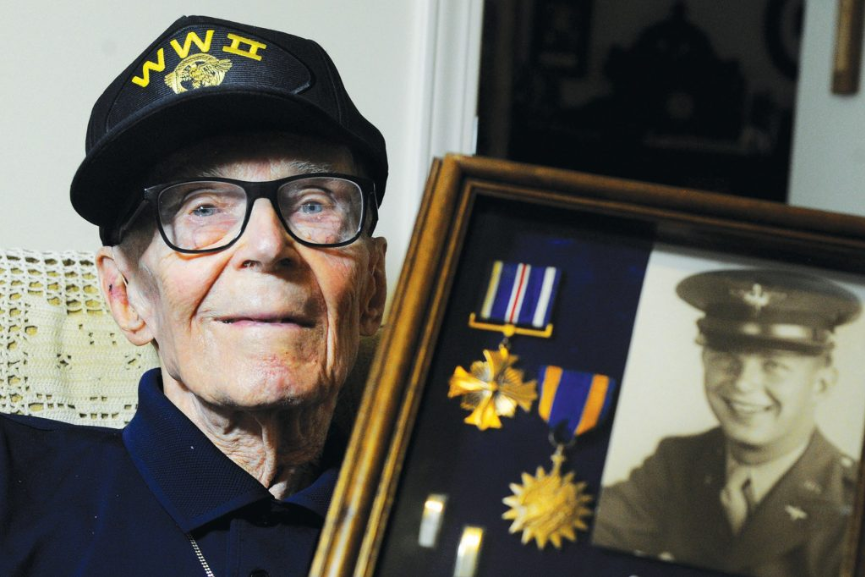 In March 1944, Sterling Ditchey was training in Columbia, S.C., to be a bombardier and navigator on a B-25 bomber. His crew was granted a weekend pass, and they decided to visit the Ohio hometown of one of his fellow airmen.

Ditchey, a California native, was sitting on a Greyhound bus in the Buckeye State when he struck up a conversation with a young woman named Cleola Green. The two went on a group date before Ditchey returned to training and was deployed.

His military service took him on a “great adventure” that covered 13,000 miles with stops in Puerto Rico, South America, Liberia, Mauritania, Morocco, Algeria, Tunisia and Corsica.

“The war took me to places I didn’t know existed,” said Ditchey, now 96.

He spent 10 months in Corsica, an island off the coast of France, during which time he flew 70 missions: 55 in Italy and 15 in Southern France. They targeted bridges, tunnels and gun embankments. His service earned him 10 Air Medals and a Distinguished Flying Cross. In 2017, he was one of 11 veterans who were given Legion of Honor awards from the French president.

“I had a mission and I did what I was supposed to do,” Ditchey said. “That was my contribution.”

While he was in the Mediterranean theater of operation, he and Green wrote each other almost daily. She saved every letter he wrote her.

“I started out this afternoon a little downcast because this is one of those rainy days where there is absolutely nothing to do but somehow the mail plane came through and brought a couple letters from home and one from you. . . . Now I really feel like being something,” another letter said.

At first he signed his letters “Your friend,” but eventually he began to sign them “Love, Sterling.”

He was discharged from the Air Corps on June 19, 1945, and 11 days later, he married Green at her church in Ohio. Ditchey returned to his prewar job at the phone company and the couple raised two daughters in Ditchey’s hometown of Orange, Calif.

Cleola died in January after more than 73 years of marriage to Sterling.

Ditchey now lives in Thousand Oaks, and in August he will serve as one of the grand marshals of the Wings Over Camarillo Air Show.