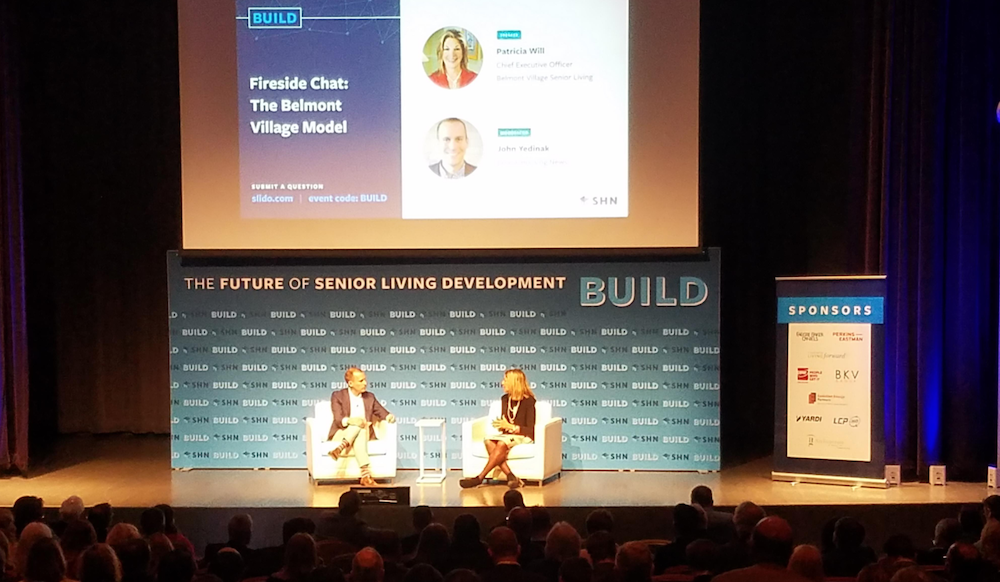 In recent years, a growing number of residential real estate developers have trained their sights on senior living and launched project pipelines. This trend will continue, and well-established senior living players must up their game in response, according to Belmont Village CEO Patricia Will.

In particular, she believes too many senior living communities have poorly designed living units.

“The industry was invented on the paradigm of boring studios with not enough storage,” Will said Wednesday at Senior Housing News’ BUILD event in Chicago.

Houston-based Belmont Village is currently in the midst of “massive renovations” to upgrade units across its portfolio of about 30 properties, she said.

Other voices in the industry have cautioned that multifamily developers could give senior living a black eye — and even endanger older adults —  if they dive into projects without fully grasping the operational complexities. Will believes these concerns are well-founded but also is trying to learn from the new entrants.

“I love the fact that residential developers are … going to make us better,” she said.

Recently, Will’s own mother moved into a Belmont Village community, and this experience drove home the shortcomings in unit design.

“When I moved my mom into Belmont Village … I had to ‘live’ there for the first time and I said, ‘What about the counter space? Where does she plug in her stuff?’” she explained.

Will began to make a list of design issues in the unit, she told SHN in an interview after her BUILD panel. Beyond the lack of counter space in the bathroom and kitchen, she identified a number of other challenges — the impracticality of high shelves and cabinets, for example.

Belmont Village had already started to update its units at that time, but Will’s personal experience added fuel to the effort. And while her mother’s situation highlighted the ways that unit design could be improved, it also underscored the potential gap between existing senior living buildings and the new supply being created by residential developers. These developers are well-versed in how to create units with well-designed bathrooms, kitchen and storage.

Improving units does not necessarily call for cost-prohibitive changes, Will told SHN, saying the renovations that Belmont Village is doing are within the typical CapEx budgets for the company.

Will is embracing the challenge, and she hopes that residential developers who are just entering senior living will likewise take lessons from the legacy players in the space.

“[I hope] that they internalize that the customer is not buying a floorplan on the internet, and that what goes on inside the building has to be very carefully thought through for the 80-somethings that live there,” she said.

Serving a consumer base of this age demands not only operational savvy in terms of programming and care, but careful attention to design details such as how many footsteps residents and staff must take to reach each other or amenities.

“I think they need to be cautious,” she said of multifamily developers getting into senior housing.

Building up, not out

At the same time that Belmont Village is renovating existing buildings, the company is expanding through new developments, which Will detailed at BUILD. Highlights include:

In addition to the La Jolla highrise, Belmont Village is constructing a highrise in Fort Lauderdale, Florida. The company is increasingly “building up, not out,” Will said.

An assisted living and memory care building in Chicago’s mixed-use Lincoln Commons development is also on track to open later this year.

Even as Belmont Village expands and evolves in certain respects, such as through the Baptist Health JV, the company’s basic model remains the same. Will doubts that Belmont Village would launch a Medicare Advantage plan, for instance, and she has no intention at the moment to target a middle-market or younger consumer. Although many Belmont Village residents are active and independent, 40% are at least 90 years old, Will said. She is content to serve this group.

“They are the ultimate survivors,” she said.

Click here to read the complete article on SeniorHousingNews.com.