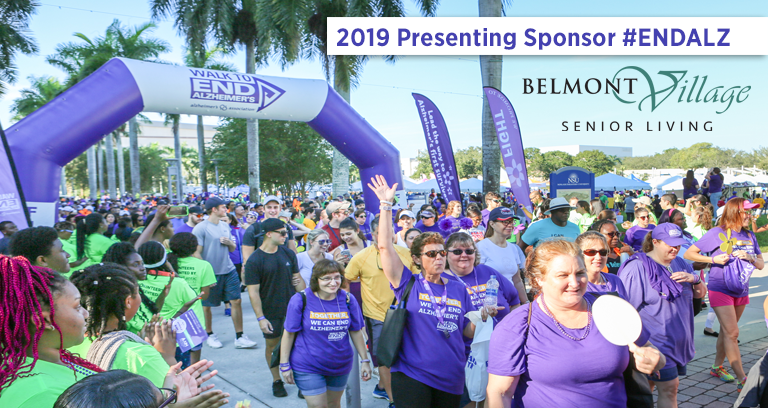 Belmont Village Fort Lauderdale, a new luxury senior-living community scheduled to open this fall, is proud to announce its presenting sponsorship of the 2019 Walk to End Alzheimer’s in Broward County, demonstrating its commitment as a leader in the fight against the disease affecting more than 5 million Americans and more than half a million Floridians.

Held in more than 600 communities nationwide, the Alzheimer’s Association’s Walk to End Alzheimer’s is the world’s largest event to raise awareness and funds for Alzheimer’s care, support and research. In Broward County, the event will take place on November 9 at Nova Southeastern University in Fort Lauderdale.

“As a longtime supporter of the Alzheimer’s Association, we are excited for the opportunity to partner with the organization in Broward County as we prepare to open our first South Florida community,” said Patricia Will, Co-Founder and CEO of Belmont Village Senior Living and former board member of the Alzheimer’s Association Houston chapter. “As a senior living and memory care provider, we see the daily toll Alzheimer’s takes on our residents, their families and caregivers, and we are pleased to do our part to help raise awareness for those in the community affected by the devastating disease.”

The company, based in Houston, has proudly supported the Alzheimer’s Association since its founding in 1997 and joined the fight as a national team in 2017. In total, Belmont Village has raised more than $350,000 for the Alzheimer’s Association through fundraising events held across its 29 communities in major metropolitan areas throughout the U.S.

“We’re so grateful for the support from Belmont Village Senior Living,” said Audra Affilitto, executive director of the Alzheimer’s Association’s Southeast Florida Chapter. “The company is taking a huge stand for Alzheimer’s awareness as presenting sponsor of the Broward Walk to End Alzheimer’s. With more than half a million Floridians living with Alzheimer’s disease, their support is critical to bring the necessary services to the Broward community.”

Located at 1031 Seminole Drive, Belmont Village Fort Lauderdale will offer residents first-class elder care within an urban, amenity-rich, and socially-focused setting. Nestled in the heart of Fort Lauderdale, the community will encompass 204 private apartments for independent living, assisted living and memory care. The luxury high-rise development will feature ocean views, restaurant-style dining, and an abundance of amenities and leading edge programs designed to keep residents active so they can thrive physically, socially and mentally.

A pioneer in senior-living, Belmont Village prides itself on its proprietary resident programming founded on partnerships with innovative universities and healthcare institutions and maintains a multidisciplinary research approach under the direction of a nationally recognized gerontologist. The company’s award-winning Circle of Friends program is a specially designed memory enrichment program for residents with Mild Cognitive Impairment (MCI). Guided by medical research, the program tackles the effects of MCI through a daily program of activities designed to maintain mental alertness and thwart memory loss while promoting confidence in social interactions and boosting self-esteem.

“We support the Alzheimer’s Association because we believe in its mission, and we walk in honor and remembrance of our residents and our own family members who have fought this fight. We hope our steps will lead the way to a cure,” added Will.

Alzheimer’s disease has a significant impact in Florida. Statistics provided by the Alzheimer’s Association, include: