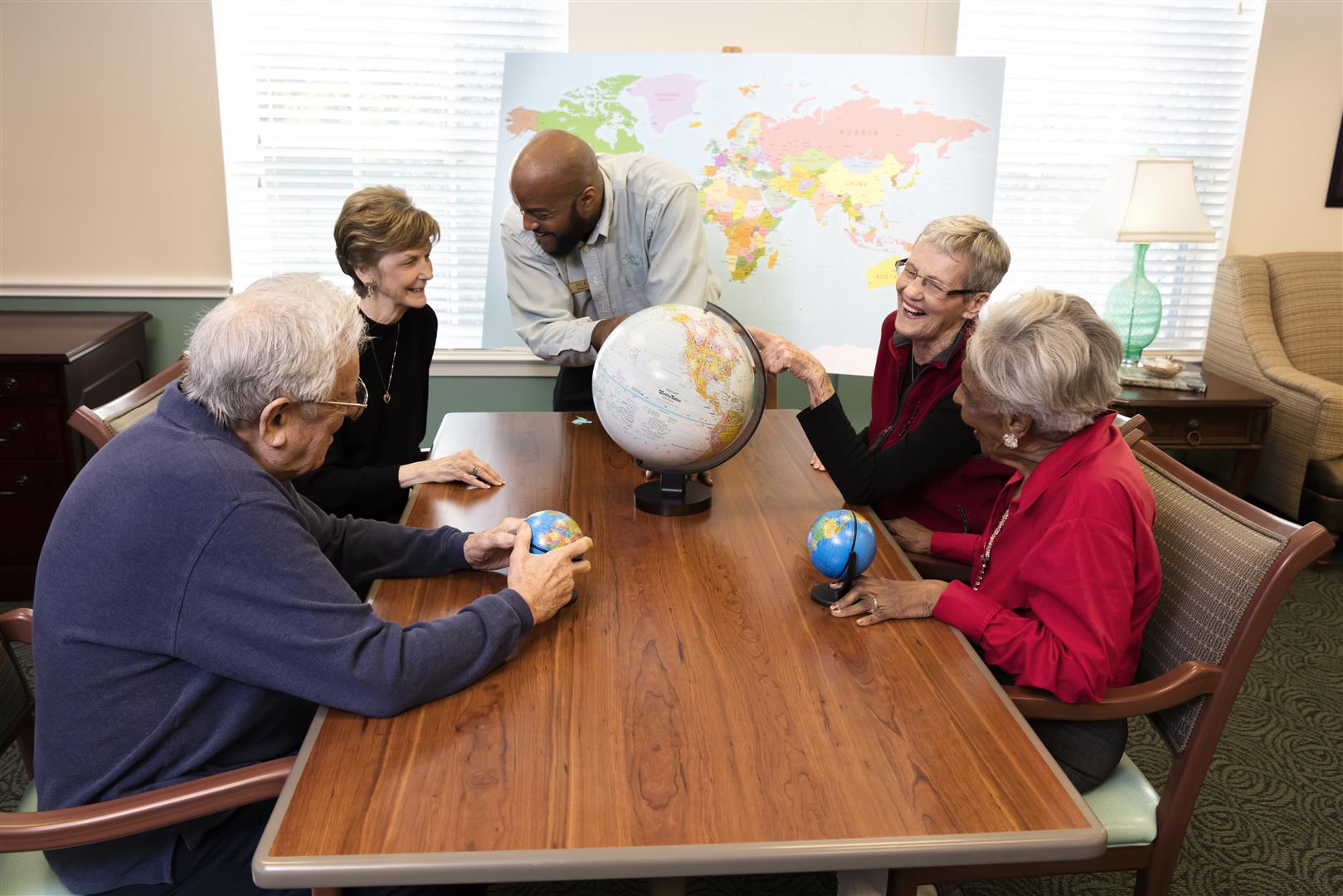 Successful Aging Along the Continuum of Dementia Care

Part of the mission of senior living is to promote successful aging even for residents with cognitive deficit. Successful aging, according to research, requires a person to be in good physical, psychological, and cognitive health, enjoy a social support network, and express feelings of happiness. But researchers admit that optimistically, only about 20 percent of people in advanced years can reach this lofty pinnacle. Are the other 80 percent unsuccessful? Because that other 80 percent are our residents.

The solution lies in reframing the idea of what constitutes success. Senior living providers create environments where a variety of adaptations reduce the negative impact of social and health-related stressors. From their perspective, successful aging does not require being free of disease. Rather, success means transcending impairments and finding a satisfying life filled with meaning, purpose, and social connections. With this definition in hand, a model of successful aging can be applied to dementia care at all stages of the disease. The programmatic challenge is to design multiple layers of architectural and social/emotional environments that are adapted in such a way as to support the predictable and unpredictable manifestations of decline by responding to the human need to feel normal, connected to others. It is more than being person-centered, more than a pleasant day. To achieve successful aging status, an environment must restore a feeling of vitality and purpose.

Let’s look at how a successful aging environment can be modified at various phases of cognitive decline, from mild cognitive impairment (MCI) to dementia. According to an article in Generations, moving into a community is described as a four-stage process: 1) The Decision; 2) The Preparation; 3) The Physical Move; 4) The Adaptation to the new environment[i]. As a resident experiences cognitive changes and needs a different kind of environment, each of these stages is reactivated, leading to the potential for conflicted feelings, resistance, and anxiety. 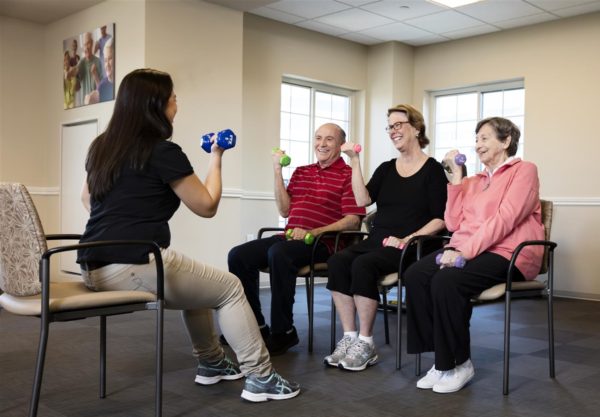 The decision to move to a senior housing community is frequently precipitated by awareness that the older adult is “mentally slipping” and can no longer manage a completely independent lifestyle safely. Although reasons for making the move vary, the adjustment to the new community is influenced by several factors, not the least of which is whether or not the older adult owned the choice.

Stage One: The Decision to Move

At the behest of her daughter, Astrid, age 80, a retired teacher and recent widow, moves from her home in Pennsylvania to a Los Angeles senior living community located walking distance from her daughter. Astrid acquiesces to her daughter’s preference, in part because she is in the beginning stages of MCI and is feeling confused by what are now overwhelming household decisions. Formerly socially active, Astrid has become withdrawn and isolated.

Astrid is an example, a composite of three residents in Assisted Living. Stage one is initiated for Astrid by her daughter. The onset of MCI magnifies Astrid’s grief about recent widowhood. Coping skills are compromised, and unsuccessful aging has set in. Research suggests that Astrid’s social isolation alone portends a rapid descent into dementia. Senior housing rather than home care is Astrid’s best choice; to regain successful aging status, she needs the socialization and stimulating activities available in an Assisted Living environment where she can resume a lifestyle that is as independent as possible. The community will possibly lessen the degree of MCI, and in any case, will give her quality of life, purpose, and a feeling of belonging.

After the decision to move is made, the next step is downsizing. It is wrenching and laden with grief for Astrid to leave her two-story, four-bedroom house filled with furniture and objects infused with nostalgic memories of happy times. She weeps when she leaves and, months later, continues to talk about what she has left behind, even though she is happy to be close to her daughters.

Each stage has its own challenges for the new resident. The preparation stage is a particularly sensitive time, often fraught with grief as, in Astrid’s case, the loss of her husband is compounded by the loss of a former lifestyle. All too often, a new resident’s grief at leaving a familiar home is ignored or minimized by staff who fear that talking about loss will exacerbate feelings of grief. An unproductive approach is to attempt a distraction from grief by focusing instead on excitement for what is to come. Grief counselors state that just the opposite is needed[ii]. When grief is unacknowledged, feelings are bottled up and magnified, leading to a heightened sense of loneliness and a poor adjustment. A person is helped through the work of grieving by being able to talk to an empathetic listener about the loss. This will help the resident get past the grief. Astrid is helped by a staff member with good listening skills.

Astrid is anxious about the senior living community because she is a shy, rather introverted personality who does not make friends easily. Her daughter helps her unpack and get organized, but she is beset with a paroxysm of anxiety. She has never lived on the West Coast and is not sure she will have anything in common with the other residents.

Again, the unpacking and organizing for what will be her new home unleashes feelings of grief and anxiety. Sensitive transitions such as this one are best managed by an empathetic staff member assigned as a move-in coordinator.

Astrid is greeted by a resident from the Welcome Committee who is also a retired teacher. A nurturing Activity Director and the Welcome Committee member are the bridge Astrid needs between her former life and her new life. She quickly becomes part of a gregarious group of retired professionals who include her in a wide array of events, activities, and outings. She is restored to successful aging in the senior living environment, once again finding pleasure, purpose, and engagement in life despite occasional bouts of confusion and recent grief.

This stage is the most challenging part of the moving-in process for a resident, whether or not they have cognitive deficits, and it is one that should not be left to chance. A poor adaptation can result in feelings of discontent that fester for long periods of time and sometimes lead to a resident moving out. Using the successful aging model as a gauge, staff can assess the early adjustment of a new resident and strategize how to enable a positive experience.

As residents enter phases of cognitive decline, they will need considerable environmental modifications to continue aging successfully. When these modifications require moving to another part of the building, friendships will be relinquished and the four-step move-in process will be rekindled.

Astrid’s MCI has progressed to mild dementia. She can no longer keep up with her friends’ repartee and activity choices. Her repetitive questions and anxiety are evident to her peers. Embarrassed by her memory challenges, , she retreats to her room and avoids meals and activities. The environment no longer supports her successful aging. The staff Transition Team recommends she move to a specialized seven-days-per-week, structured program in a smaller space with a trained, dedicated leader who adapts all activities for mild to moderate memory loss. Participants live in non-secured Assisted Living apartments on the third floor adjacent to the main activity room for the group. Astrid is a good candidate because her MoCA cognitive screening assessment falls within the 13 to 25 range, and she does not wander. Although initially reluctant to make the move, Astrid tries out the group for a week and happily states she now has a reason to get up in the morning.

What Astrid needs at this point is a highly structured, smaller, predictable environment, with a leader trained to compensate for the dementia-induced decline in communication skills, both verbal and non-verbal. The specialized program supports the highest level of functional ability, restoring a sense of competence and self-esteem. It provides Astrid with stimulating activities at just the right level designed to preserve remaining mental abilities, and it modifies the living environment by simplifying access to activities, now a short walk to the activity room. She is surrounded by a small group of residents, all at the same functional level, who are guided by specially trained and consistent staff that know how to support group participation and daily life. These adaptations support Astrid’s declining coping skills, build her confidence, and create a feeling of belonging. Once again, she is a successful ager.

Transitioning to a Memory Care Neighborhood

Astrid’s dementia progresses. Gradually, participation in the group program causes confusion, disorientation, and discomfort. The environment is not sufficient to meet the criteria for Astrid’s successful aging and Astrid would benefit from an adapted environment, this time for late-stage dementia.

As Astrid’s dementia evolves into a later stage of dementia, she is no longer thriving in her setting. The physical environment begins to feel “too big” and bewildering. She is easily confused and prone to angry outbursts when trying to locate her room. She needs prompts to eat her meal because she has forgotten how to get started and she is not sure how to use utensils or what to do with her napkin. The group talks too rapidly and she cannot understand the context of their discussions. When staff members attempt to help her, she sometimes thinks they are assaulting her. When she tries to protect herself from them, she can be combative. Showering is especially difficult and she refuses to change her clothes. Lonely and depressed, she reaches out for companionship in socially inappropriate ways. The Transition Team meets with her daughter to discuss a move into their secured environment which is adapted for later stage residents. The new environment is predictable and simplified. Staffing ratios are higher and staff have specialized training in how to approach, prompt, and engage residents. It takes Astrid about one week to adjust to the new environment, but very soon she regains a feeling of mastery and once again enjoys happiness, friendships, and competence—the hallmarks of successful aging.

What Astrid needs at this stage is an environment that modulates sensory and social stimulation because visual, auditory, and other sensory impairments create problems processing sensory information[iii]. This can be done through elements such as small social spaces rather than large common areas, understandable spaces that resemble a home, short corridors and easy access to the activity and dining area, way-finding objects on walls such as personal photos, and signage on the floor with arrows that identify “toilet” (because late-stage residents tend to look down). To help with dining challenges, residents are seated in groups based on friendships as well as functional levels with consistent prompting from staff where needed. Background music is modulated for the optimum level of stimulation. Loud rhythmic music is disruptive to the eating process for late-stage residents, but this environment uses music that is soothing, much like spa music. Music is not necessary during dining, but staff and families request it, and their wishes are incorporated into the total environment. The day is structured and predictable, with activities that are a Just Right Challenge, presented with appropriate prompts and geared to manageable success. Even at a late stage, Astrid can enjoy a restored sense of competence, pleasure, and purpose adapted for her remaining abilities and functional level.