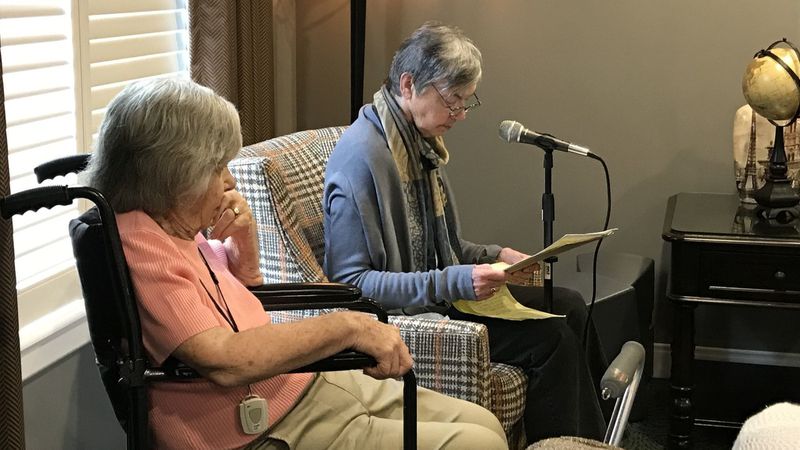 Belmont Village Glenview resident Sheila Dixon is one of the 1 million people in the United States affected by Parkinson’s disease, a progressive, incurable neurological disorder that results in a complex array of systems. While there are medications, surgeries and exercises recommended for patients living with the disease, Sheila has found that meditation helps to relieve her symptoms. She says practicing meditation assists with the agitation and speech impairment caused by the disease because it helps her refocus and calm her mind.

A retired clinical social worker, Sheila began practicing meditation in the late ‘70s and was inspired by Jon Kabat-Zinn, a professor of medicine and the creator of the Stress Reduction Clinic and Center for Mindfulness in Medicine, Health Care and Society at the University of Massachusetts Medical School. As her interest in meditation grew, Sheila took part in multiple retreats to expand her knowledge of the practice and became a certified instructor so that she could share her experience with others.  After more than four decades of meditating, she now offers meditation classes to fellow Belmont Village residents.

Each Monday in April, during Parkinson’s Awareness Month, Sheila held meditation sessions to raise awareness about its benefits and advantages for those living with Parkinson’s disease. Residents say that Sheila adds a positive element and helps create a soothing experience for them and Shelia enjoys sharing the benefits of meditation with her Belmont Village community. She says it gives her purpose and she hopes the program grows and attracts more residents – even those who aren’t living with Parkinson’s disease.

“It helps people ground themselves,” Sheila said in a recent interview with the Chicago Tribune. “My meditation and the way that I can quiet myself down really helps.”

Parkinson’s Disease is typically associated with gradual loss of motor control, symptoms start slowly, sometimes beginning with a barely noticeable tremor in just one hand. Stiffness or slowing of movement are also early stage signs of the disease, but there are methods for reducing the impact of symptoms. In addition to Sheila’s meditation classes for residents, Belmont Village offers a Parkinson’s exercise class every Wednesday that is open to the public. Click here to learn more.

“We’re so pleased to add Sheila’s class to our existing Parkinson’s support program, and it’s something that all of our residents can benefit from – those who have participated so far say they love it,” said Michele Helffrich, Executive Director at Belmont Village Glenview. “One of the things that makes us a close community is creating opportunities for our residents to share their expertise and experience. Shelia’s meditation classes embody how we all care for and support each other at Belmont Village.”

Learn more about Sheila and her meditation methods in the below video from Chicago’s WGN: